Justice is the constant and perpetual will to allot to every man his due.
Injustice anywhere is a threat to justice everywhere.
In matters of truth and justice, there is no difference between large and small problems, for issues concerning the treatment of people are all the same.
The dead cannot cry out for justice. It is a duty of the living to do so for them.
Social justice cannot be attained by violence. Violence kills what it intends to create.
Justice will not be served until those who are unaffected are as outraged as those who are.
Justice consists not in being neutral between right and wrong, but in finding out the right and upholding it, wherever found, against the wrong.
The failure to invest in civil justice is directly related to the increase in criminal disorder. The more people feel there is injustice the more it becomes part of their psyche. 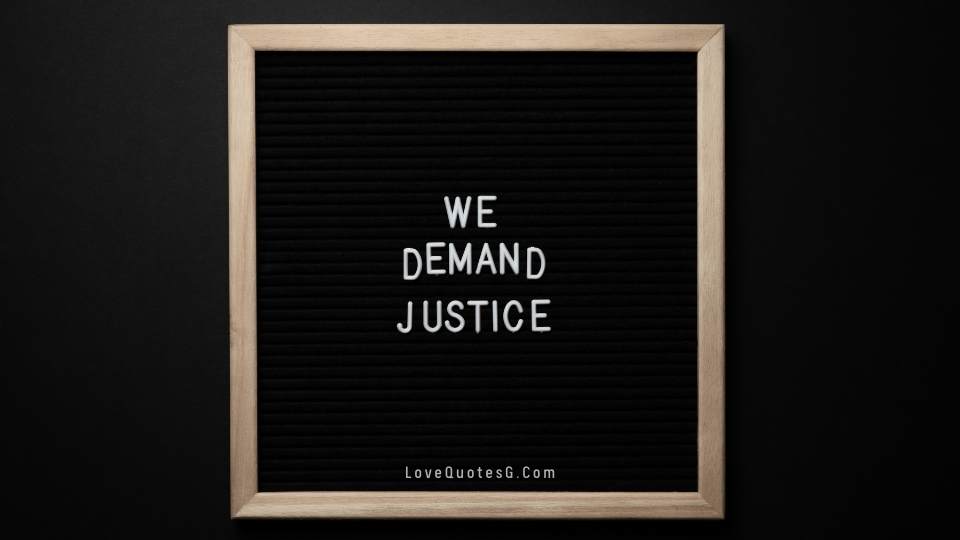 Where justice is denied, where poverty is enforced, where ignorance prevails, and where any one class is made to feel that society is an organized conspiracy to oppress, rob, and degrade them, neither persons nor property will be safe.

There may be times when we are powerless to prevent injustice, but there must never be a time when we fail to protest.
Men often mistake killing and revenge for justice. They seldom have the stomach for justice.
Courage is of no value unless accompanied by justice; yet if all men became just, there would be no need for courage.
Justice is a contract of expediency, entered upon to prevent men from harming or being harmed.
Justice is conscience, not a personal conscience but the conscience of the whole of humanity.
Justice is the means by which established injustices are sanctioned.
This thing that men call justice, this blind snake that strikes men down in the dark, mindless with fury, keep your hand back from it, pass by in silence.
You get justice in the next world. In this one, you have the law.
You know, the courts may not be working anymore, but as long as everyone is videotaping everyone else, justice will be done.
If we do not maintain justice, justice will not maintain us.

A criminal is a person with predatory instincts who has not sufficient capital to form a corporation. ~Howard Scott
A free economy and strong communities honor the dignity of every person, rewarding effort with justice, promoting upward mobility, and building solidarity among citizens. ~Paul Ryan
A jury consists of twelve persons chosen to decide who has the better lawyer. ~Robert Frost
A lawyer is a gentleman who rescues your estate from your enemies and keeps it for himself. ~Lord Brougham
A real patriot is a fellow who gets a parking ticket and rejoices that the system works. ~Bill Vaughan
A rule that cannot be bent will certainly be broken. ~Robert Brault
A soul that is kind and intends justice discovers more than any sophist. ~Sophocles
All the great things are simple, and many can be expressed in a single word: freedom, justice, honor, duty, mercy, hope. ~Winston Churchill
An appeal… is when you ask one court to show its contempt for another court. ~Finley Peter Dunne
An earthquake achieves what the law promises but does not in practice maintain – the equality of all men. ~Ignazio Silone
Any society that needs disclaimers has too many lawyers. ~Erik Pepke
At his best, man is the noblest of all animals; separated from law and justice he is the worst. ~Aristotle
Bad laws are the worst sort of tyranny. ~Edmund Burke
Capital punishment is as fundamentally wrong as a cure for crime as charity is wrong as a cure for poverty. ~Henry Ford

Justice? You get justice in the next world. In this world, you have the law. —William Gaddis
Peace and justice are two sides of the same coin. —Dwight D. Eisenhower
Justice and judgment lie often a world apart. —Emmeline Pankhurst
It is not a Justice System. It is just a system. —Bob Enyart
Charity begins at home, and justice begins next door. —Charles Dickens
Justice will not be served until those who are unaffected are as outraged as those who are. —Benjamin Franklin
If we do not maintain justice, justice will not maintain us. —Francis Bacon
Corn can’t expect justice from a court composed of chickens. —African proverb
Justice denied anywhere diminishes justice everywhere. —Martin Luther King, Jr
Every man loves justice at another man’s expense. —Unknown
A judge is a law student who marks his own examination papers. —H. L. Mencken
Justice is like a train that is nearly always late. —Yevgeny Yevtushenko

I have always found that mercy bears richer fruits than strict justice. —Abraham Lincoln
Justice and only justice shall always be our motto. —Unknown
Nobody gets justice. People only get good luck or bad luck. —Orson Welles
The arc of the moral universe is long, but it bends towards justice. —Theodore Parker
The administration of justice is the firmest pillar of government. —George Washington
The task of a judge is not to make the law – it is to apply the law. —Sonia Sotomayor
Law too gentle are seldom obeyed; too severe, seldom executed. —Benjamin Franklin
Corn can’t expect justice from a court composed of chickens. —African proverb
Injustice anywhere is a threat to justice everywhere. —Martin Luther King, Jr.
Criminals do not die at the hands of the law. They die by the hands of other men. —George Bernard Shaw
Where there is power, there is resistance. —Michel Foucault

“Justice delayed is justice denied.” —William E. Gladstone
“Compassion is no substitute for justice.” —Rush Limbaugh
“It is the spirit and not the form of law that keeps justice alive.” —Earl Warren 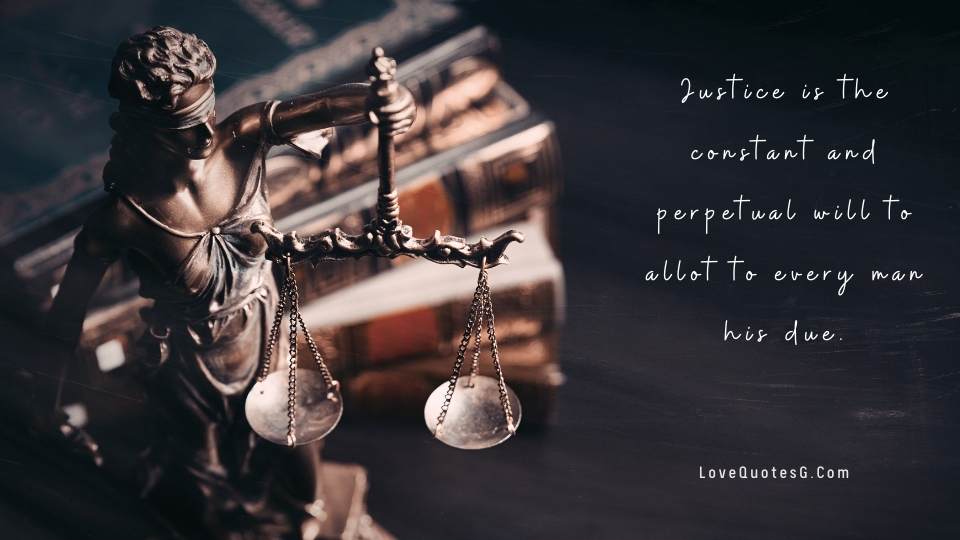 “The severest justice may not always be the best policy.” —Abraham Lincoln
“Nobody gets justice. People only get good luck or bad luck.” —Orson Welles
“The first thing we do, let’s kill all the lawyers.” —William Shakespeare

“Injustice anywhere is a threat to justice everywhere.” —Martin Luther King, Jr.
“If we do not maintain justice, justice will not maintain us.” —Francis Bacon
“Silence in the face of injustice is complicity with the oppressor.” —Ginetta Sagan
“Never pray for justice, because you might get some.” —Margaret Atwood
“It is not a Justice System. It is just a system.” —Bob Enyart
“Peace and justice are two sides of the same coin.” —Dwight D. Eisenhower
“Sometimes, the only way to get justice is to take it for yourself.” —Leigh Bardugo
Justice is the insurance we have on our lives, and obedience is the premium we pay for it. —William Penn
A good and faithful judge ever prefers the honorable to the expedient. —Horace
“There is no such thing as justice — in or out of court.” —Clarence Darrow